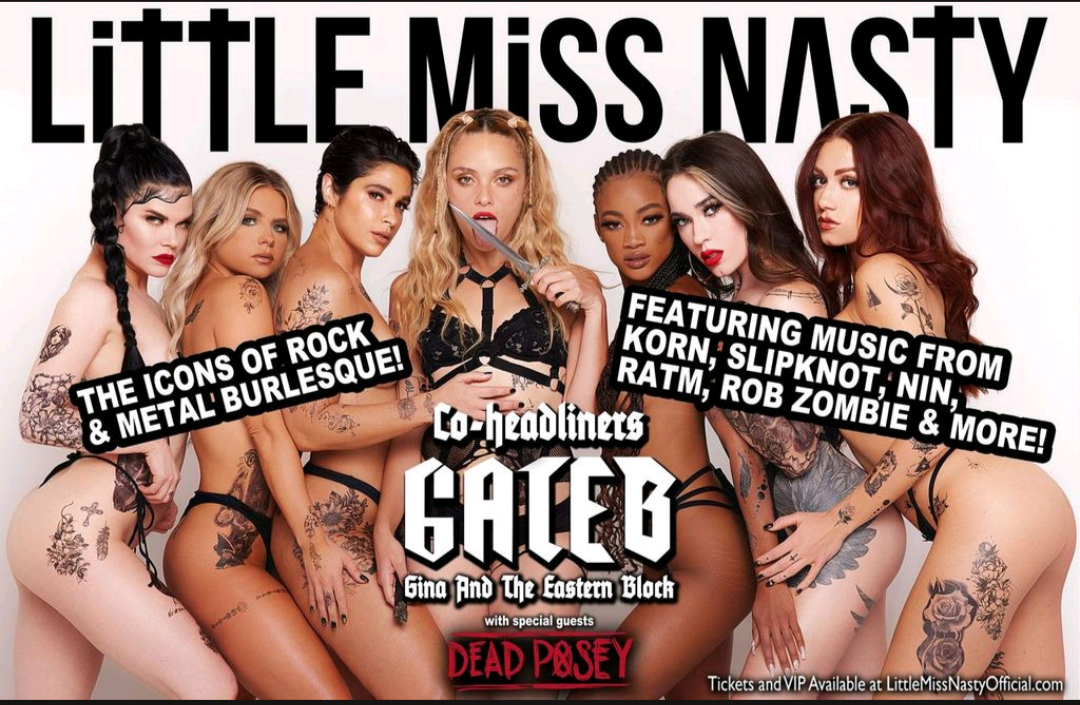 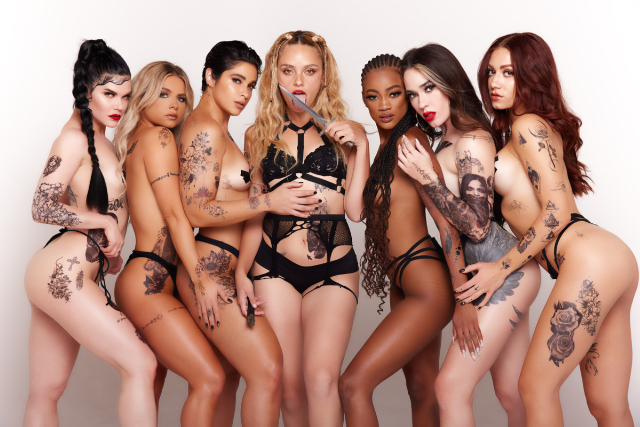 Little Miss Nasty Little Miss Nasty are the innovators and iconic pioneers of Rock and Roll Burlesque.Beautiful women. Ridiculously talented performers. Absolutely the most badass rock and metal (and even some hip hop) Vegas style production that you’ll ever see! The Little Miss Nasty live experience is a professionally choreographed production featuring some of the entertainment industry’s best dancers, aerialists, vocalists and contortionists. The show is full of over the top visuals and blazingly cool music fromKorn, Slipknot, NIN, RobZombie, RATM, IC3PEAK and others along with surprises that leave jaws on the floor and memories fired up. Everyone leaves a Little Miss Nasty show feeling sexy, empowered and full of adrenaline (seriously everyonedoes)!

What started as an underground, must see show at LA’s historicViperRoomin 2012 has since developed into a globally recognized lifestyle brandand highly produced international touring spectacle.Little Miss Nastyhasnewly released original songs on your radio dial as well! 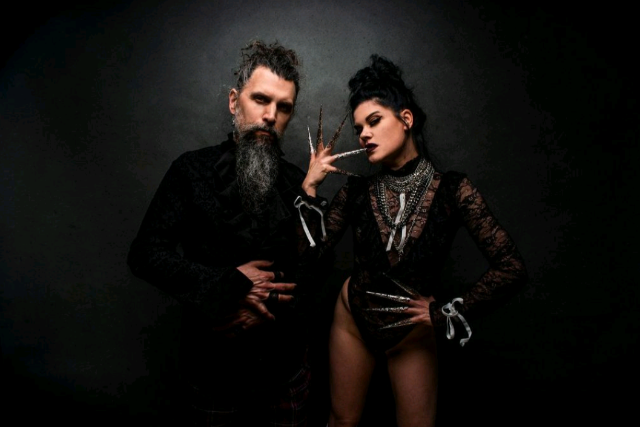 Gina And The Eastern Block

Strip Club Anthems! GATEB released their debut single, "Sippin' On A Forty" in 2016 and attracted significant attention for the over the top salaciousness and sexiness of the accompanying music video for the song. The song payshomage to boredom, day drinking and lipstick lesbian sex. The dark, brooding, hip hop infused track “Bootsy Wally” (also released in 2016) has enjoyed significant popularity as well. Both songs have become verifiable stripper anthems inspiring many people to post performance videos online. #sippinonaforty #bootsywally

The band released the raucous and nasty rocker "Get Gone" in late 2016."Get Gone" has received significant air play on BBCRadio1 probably because it is the perfect "go fuck yourself" anthem.

The quarantine of 2020 enabled GATEB to write, record and release "Bloodsucker Motherfucker" featuring Kevin Thrasher from Escape The Fateas well as a nasty cover version of the Nine Inch Nails masterpiece "Head Like A Hole".

“The Insanity” was released in March of 2021 and is the first release from the band’s deal with Symphonic Distribution.“Pussy Gon Eat You”, released in May 2021,is a highly infectious electronic and alternative metal track co-produced by hip hop and electronic musicproducer The Snowy White Owl and Marc Jordan.“The lyrics to “Pussy Gon Eat You” are not for the faint of heart. This song is ‘Pussy Power’ on crack. I did things vocally that I’ve never done before. I got weird!”, says vocalist Gina Katon.

The band is putting the finishing touches on a handful of more new songs expected to be released during the of spring of 2022 including a mindblowing collaboration with Little Miss Nasty and Heidi Shepherd fromButcher Babies.Gina And The Eastern Block has gone on numerous national and international tours and has amassed a large cult following across the world.
Dead Posey 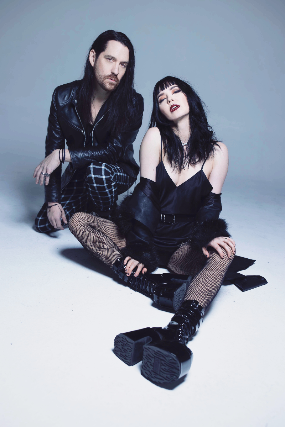 Dead Posey BIO (Feb ‘22) LosAngeles-bred rock duo Dead Posey have punctured their proverbial vicious vein by serenading a posse of devoted followers with fuzz-guitar infused rock-and-roll and edgy yet timeless-soundingvocals that pack an anti-establishment punch. When Danyell Souza(Lead Singer / Producer) and Tony F.(Guitarist / Multi-Instrumentalist / Producer) met, they quickly tapped into an undeniable  chemistry that led them down a cathartic path of creating hard rock sounds riddled with unsettlinglyrical themes ranging from sexism, depression, angst and rage against oppressive systems —alldoused with a healthy dose of “DGAF” attitude yet still seeing the beauty within the madness.

In 2018, Dead Poseysunk their venomous fangs intothe scene with their self-produced debutEPFreak Showand standout track “Don’t Stop The Devil”,which has over 23M+ digital spins, followed by the darker and more industrial-tinged Malfunction EP in 2020. Most recently, the duo dropped singles “Russian Roulette” and  “Sorry I’m Not Dead”- adrenaline-inducing rockers bothlisted on Loudwire’s “Best Rock + Metal Songs”(of August and November 2021, respectively), the latter track praised for its“industrial-leaning rock...with edgy, badass attitude.”Music programmers also took favor as the tunes were added to rock tastemaker’s playlists including Spotify’s-Rock Hard, New Noise, and All New Rock editorial playlists and Apple’s Breaking Hard Rock & New In Rock. Feeding a monstrous appetite for live performance, Dead Posey has unfurled their punk-infused high-octane shows at notable festivals such as Louder Than  Life, Aftershock, and Shiprocked,and played on illustrious stages such as Rock City and Electric Ballroomin the UK,Gramercy Theaterin NYC among other iconic venues throughout North America.The band looks forward to forthcoming tours and an appearance at Download Festivalin thesummer of 2022 in the UK.Alsoon the horizon is Dead Posey’s next single,“Can’tTake Me Down”— a relentless and snarky blast of strength slated for March ‘22 release.Dead Posey’s music has been heard inFox’s Lucifer,MTV's Teen Wolf, Marvel’s Cloak &Dagger, and Netflix's Jack Whitehall – Travels With My Father among others, as well as in ads for Taco Bell, Sony PlayStation, Riot Games ’League of Legends, Back 4 Blood, and many more.The duo has additionally received positive mentions from the likes of The Huffington Post and Guitar World Magazine. Like vampires craving blood, Dead Posey’s hunger for unapologetic creative expression is deeply intensifying. Danyell and Tony have steadily begun to uncage their years work of titillating and provocative sounds into the headphones of hardcore musical pariahs and grungey sound-systems abound. Meanwhile the ever-growing Dead Posey faithful anxiously await their debut full-length album in 2022
Media
Media
Media